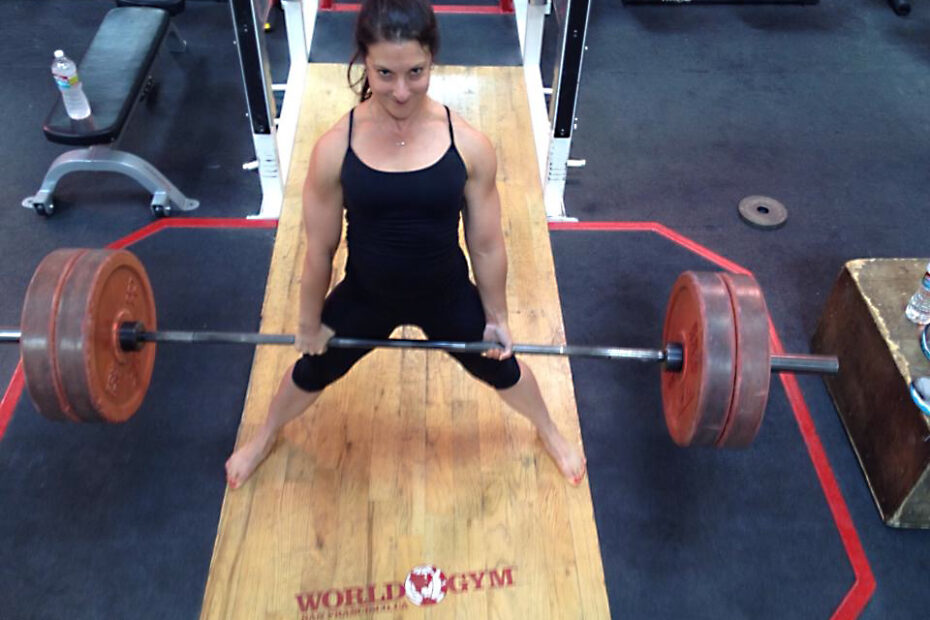 Have you ever felt out of place in your gym? Perhaps you’ve sought to bust out of the norms and expectations placed on you in these environments.

After all, most gyms look kind of like this:

First, there is the kid and his buddies on the bench press trying to impress everyone, and accomplishing little in the process.

Then there this the sea of mindless walkers and runners droning along the moving sidewalks trying to distract themselves with their iPods, televisions and magazines.

Out of the corner of your eye you might see a guy on a cell phone, another guy checking himself out in the mirror and a woman holding the lightest pink dumbbells she can find performing rep after rep of triceps kickbacks.

These typical gym scenes are playing out at this very moment.

Just the other day a teammate of mine said that she was chastised at the commercial chain gym in which she was training. The reason? She was being too noisy. Apparently her deadlifting was disrupting the other gym goers. Oh, they didn’t tell her that she had to stop deadlifting, but she was expected to lift less weight and lift “quieter”.  It’s not her fault that she was deadlifting more than 2 times her bodyweight!

Over the years I have experienced many of these circumstances. And, it doesn’t have to be this way. In fact, I was lucky enough to have mentors and coaches along the way who guided me, encouraged me, and connected me to others who shared my passions and experiences.

Don’t get me wrong, I spent more than a decade of my life training and learning on my own. I was often the only one in the gym  – Christmas day, and other holidays were no exception. And, especially as I prepared for my competitive endeavors in the sport of bodybuilding, the nature of the sport was such that it was a sole endeavor – the results based squarely on my shoulders alone.

Only now do my years of strength training, physique competition and powerlifting match the years that I spent as an athlete on a variety of teams. Growing up I excelled in basketball (so much so that I was a walk on recruit at the University of Waterloo’s Women’s team). I played varsity soccer throughout University, as well. And my volleyball skills aided my high school team to gain a silver medal at the provincial (OFSAA) championships in my senior year.  As an athlete, I cut my teeth in team sports. I was a talented athlete and a team leader – so much so that in my first year University basketball tryouts the Captain of the team told me that she looked to me for motivation in practice!

The lessons I learned as an athlete in a team sport environment served me well in bodybuilding, too. I approached my regime as an athlete, first. And second, I built my team to support me and motivate me and guide me.  This is why I believe I was so successful in my years as a Physique competitor.

I had the benefit of learning an athlete’s mindset, experiencing sport and developing skills. I had the advantage of teammates and coaches surrounding me from the time I was just a young kid, running around with my brother’s soccer team!

My high school basketball coach, Peter Ewing, taught the fundamentals of basketball better than anyone who ever coached me. Repetition, intensity, poise and the desire to never, ever give up! His coaching impacted me so much, that when I coached my first team (the Midget Girls team, while I was in my final year of High School) and through to my coaching at the Ontario College Level, I sought to emulate him – both on and off the court. I taught and coached with the same passion that he instilled in me. And, to this day, I still do!

Coach Ewing began each practice by handwriting a quote or poem on the team chalkboard.  Here was one of my favourites:

And Your Better Best
Good, Better, Best,
Never Let it Rest,
Until Your Good is Better,

For as simple as this short “poem” is, it truly packs a punch! And, it was somehow always relevant, no matter the challenge before me.

Coach Ewing left me with a quote that to this day still arouses emotion. It was true of my experiences on my High School basketball team, and it is still true today:

A long time after you have forgotten the scores (championships, or weights lifted), you will remember the people.

I was lucky. I experienced the power of athlete, coach and team in my own life, and I want you to experience this, too! This is precisely why I created Iron Sisters.

Iron Sisters is first, a team: a group of like-minded women who are charged with the responsibility of sharing, supporting and learning together.

Iron Sisters is a movement:  a group of like-minded women who have the opportunity to impact those around them – their friends, families and especially influence those women and girls who might not otherwise have the chance to become Iron Sisters themselves, if not encouraged in their journey.

Iron Sisters is a community: a group of like-minded women who, both virtually and physically, can come together to motivate, encourage and inspire.  A community in which we can share with one another what we are doing to move from Good, to Better, to Best!

Iron Sisters is YOU.

Do you want the chance to experience the power of Iron Sisters?

Stick around. We will be sharing more with you over the coming months to help you achieve your Good, Better and Best!